What is the History of Kitchens?

The Kitchen: the room in your home used for storing, cleaning and preparing food for consumption.

Having a kitchen in your home is second nature. It’s a room you do not even think about as a luxury. It is simply the area of the house where getting food or hanging out with family is completely normal and natural. This, however, was not always the case. 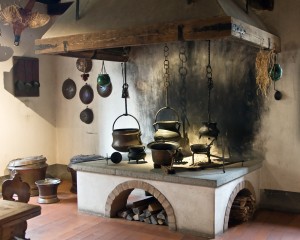 Through the years, the kitchen has become a staple in the home and with more recent changes in design, has become an area for friends and family to congregate. Today’s kitchens are a place where guests are entertained, makeshift homework areas are made, and family bonds are forged. But it has not always been this way. It has taken centuries for kitchens to evolve, taking on the current form and function we have come to know within our daily lives.

Sure, the Flintstones may have had a fully functional kitchen – garbage disposal and all – but the kitchen, as we know it today, has not always offered these amenities. In fact it wasn’t even until the period following the Civil War that the majority of kitchen appliances were invented and the ability to use these devices came into wide spread use. Over 100 years later, kitchens are still evolving – offering cleaner designs with better functionality, but this achievement has taken centuries of innovations.

Kitchens are by no means ‘new.’ The ancient world had kitchens, though they were far different than the refined and fully functional ones you can find in any modern home today. Fire was the key ingredient to all kitchens, and because of which, they were basically nothing more than large poorly ventilated rooms surrounding a central fire. For most, these kitchens were communal, since most homes did not offer a personal kitchen.

During this period of time, a kitchen was not a place that people wanted to hang out or spend more time than was necessary. They were quite dark and generally a smoky place. This was because an open flame was the only way to cook food thoroughly and proper ventilation systems had not been in place.

Another thing to keep in mind is that in today’s kitchens we take for granted how easy and simple it is to access water. All we need to do is turn on the faucet and… voila! But the kitchens of the ancient world did not have running water, and it had to be brought over by hand from lakes or river sources.

The period following the Civil War saw a major boom for inventions of the common appliances that have become staples in today’s kitchens. This boom occurred because housewives no longer had servants helping them in the kitchen and they quickly discovered they needed the help in order to keep up with all of their homemaking responsibilities. In addition, widespread use of electricity in the home seriously changed the development of the modern kitchen. Electricity allowed for these new appliances to be widely used, and thus became an integral part of modern kitchens.

After water, gas, and electricity became readily accessible in the latter part of the 19th century and iron stoves were commercialized, the modern kitchen started to take form. By the turn of the century, kitchens had gone through major changes that truly shaped the culinary landscape. By the early 1940’s, electrical appliances flooded the United States markets and appliances such as toasters, blenders, and microwaves became commonplace in household kitchens.

Kitchens in the Home

During the 1950’s, depictions of the ideal middle class household were used in advertisements and household work was often glorified. More specifically, the kitchen found itself as the focal point in this marketing propaganda, targeting housewives who spent their days keeping up the household chores, including cooking. This period saw major changes to the idea of what kitchens were, for example, traditionally a kitchen would be found toward the rear of the home whereas they began to be built more towards the center of the home. This reinforced the idea that the kitchen is not just a place to prepare food, but rather is a gathering place for the family. Learn More.

In the 1980’s, when the extractor fan become an integral part in the design for a home, it pushed the kitchen into more of a ‘real living space.’

Over 50 years later, kitchens remain largely the same in many aspects. Although design, materials, techniques, and functionality have all improved, you will almost always find refrigerators, microwaves, ovens and stoves, along with a few other typical appliances in any kitchen you enter. And as kitchen needs continue to change in the future, so will the kitchen itself!